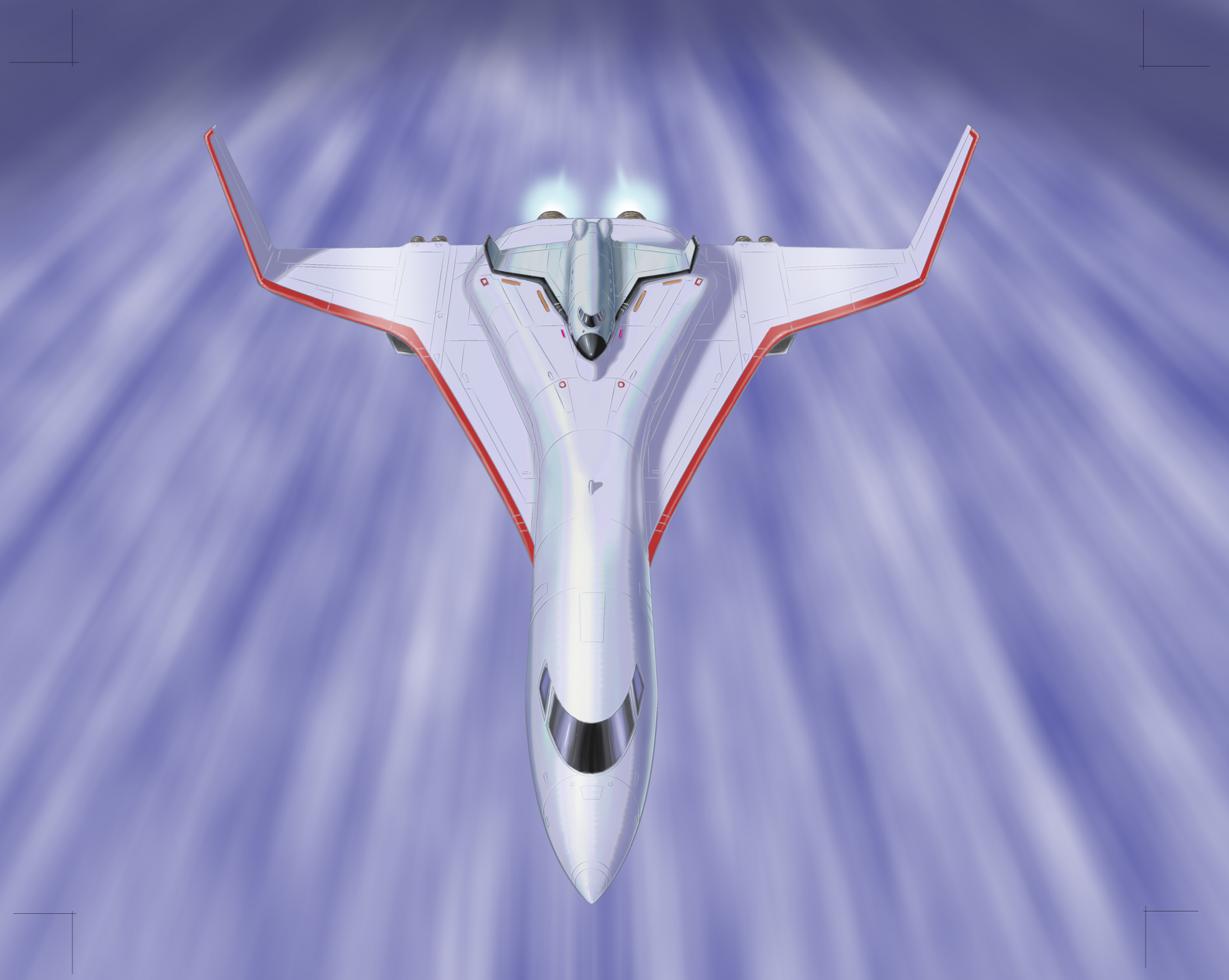 Spacecab is a fully reusable spaceplane designed to use only existing technology. The upper stage is in effect an enlarged and refined Ascender. It will be air-launched from a carrier aeroplane, also derived from Ascender. It could start passenger operations much earlier than a new vehicle that requires new engines to be developed. It also provides a low-risk stepping-stone to the development of a mature spaceplane such as Spacebus.

Spacecab’s design is aimed at achieving fully reusable orbital operations soon and at minimum development cost and risk. The cost of developing Spacecab is equivalent to about three Shuttle flights. Spacecab is a candidate to be the first orbital spaceplane, as it has the lowest cost and risk of any contending project.

The orbiter carries a crew of two and has a cabin with a capacity for six passengers or space station crew or a payload of up to 750 kg of cargo. Its blunt, swept-back shape reflects the fact that streamlining is not required for flight in space and reduces heating during reentry into the atmosphere.

Spacecab’s most basic design features have been selected so that existing technology can be used. As such, it can be certificated for routine passenger carrying. It incorporates as many conventional airliner design features as practicable, such as carrying pilots and taking off and landing horizontally.

In order to use existing engines and proven materials, and to have the margins required for civil certification, Spacecab has two stages. The carrier aeroplane stage has four turbojet engines to provide the power for take-off, acceleration to Mach 2, flyback and landing, plus two rocket engines to accelerate Spacecab from Mach 2 to Mach 4, at which point the orbiter will separate.

Spacecab can be used for launching satellites, transporting crew and supplies to space stations, sending up mechanics for satellite maintenance and repair, and government human spaceflight missions. Spacecab can be used to provide safe and economical transport to and from the International Space Station, which is an urgent requirement, and will be able to transport passengers to and from space hotels.

Spacecab comprises two stages: a booster and an orbiter. The orbiter is partly buried in the booster to protect it from air loads during the boost phase of the flight to Mach 4 and to reduce the drag at supersonic speeds.

Spacecab is in effect an updated version of the 1960s European Aerospace Transporter concept, designed to minimise development cost by using now-existing technology. In conceptual terms, the lower stage is like an enlarged Ascender and the upper stage like an advanced Ascender.

Spacecab has a payload in the one tonne class and has two piloted stages. The Spacecab Carrier Aeroplane stage accelerates to Mach 2 using jet engines. Rocket engines then take over for acceleration to Mach 4. During the rocket phase, Spacecab pulls up into a climb so that separation can take place at a height where air and thermal loads are low enough to be readily manageable. After separation, the Carrier Aeroplane re-enters and flies back to base and the Orbiter carries on to low earth orbit (LEO).

As Spacecab can be built using existing technology, Spacecab’s development should not be that much more difficult than a high-performance aeroplane.

The development cost and timescale of the prototype of each stage should be comparable with that of the prototype of an advanced aeroplane, and the estimated total cost is approximately $1 billion. This prototype could be used for early operational flights to orbit and would be ideal for launching small satellites and ferrying crews and passengers to and from space.

Spacecab was the subject of a feasibility study funded by the European Space Agency (contract number 10411/93/F/TB) in 1993-1994. The main conclusions were that new technology was not needed for an operational prototype and that development cost to initial operations would be equivalent to the cost of just two or three Shuttle flights. This study was broadly endorsed by an independent review commissioned by the then UK Minister for Space, Ian Taylor, MP.